When I first saw the cover for Bloodlines and started to read the summary, and discover it was a spin-off I went in search for the original series on Goodreads. In my contry there’s a lot of talking about Richelle Mead books, so decided to give it a shot and was very impressed.

Salvation has its price.
The words stunned Adrian for a moment, but he kept going. “You’re lying. What you’re describing is impossible. There’s no way to save a Strigoi. When they’re gone, they’re gone. They’re dead. Undead. Forever.”

Robert’s next words weren’t directed at Adrian. They were spoken to me. “That which is dead doesn’t always stay dead….”

After a long and heartbreaking journey to Dimitri’s birthplace in Siberia, Rose Hathaway has finally returned to St. Vladimir’s—and to her best friend, Lissa Dragomir. It’s graduation, and the girls can’t wait for their real lives outside of the Academy’s cold iron gates to finally begin. But even with the intrigue and excitement of court life looming, Rose’s heart still aches for Dimitri. He’s out there, somewhere.

She failed to kill him when she had the chance, and now her worst fears are about to come true. Dimitri has tasted her blood, and she knows in her heart that he is hunting her. And if Rose won’t join him, he won’t rest until he’s silenced her…forever.

But Rose can’t forget what she learned on her journey—whispers of a magic too impossible and terrifying to comprehend. A magic inextricably tied to Lissa that could hold the answer to all of Rose’s prayers, but not without devastating consequences. Now Rose will have to decide what—and who—matters most to her. In the end, is true love really worth the price?

Fall in love with Rose and Dimitri all over again in Spirit Bound, the eagerly awaited fifth novel in Richelle Mead’s enthralling Vampire Academy series.

My Thoughts:
I love this series, and of course this book has left out of breath some moments.
First Rose you’re not alone, and Adrian will always be with you just wish you loved him a little more, cause he deserves some happiness.
Lissa relationship with Christian sufer during this book after they’re break on the #4, and is a little strange to me watch them grow apart like they’ve never seen each other. That part I don’t really like. But I enjoy when they get together to help Dimitri and Rose.
In this book they are back to the court and the politics rule this part of the series along with romance and drama.
The end is a cliffhanger to final one, and since this serie is already finished I was fine with it, but if I had to with, lets just say it would be difficult.
You Might Enjoy This Book If:
You’ve read the other books on this series and can’t wait to see what will happen to Rose and Lissa, and of course Adrian.
Favorite Quotes:

“I’ve given up on you…Love fades. Mine has.”

“Don’t touch her,” he growled.
There was a note in his voice that would of scared me if it had been directed toward me. He shoved me behind him, putting his body protectively in front of mine with my back to the table. Guardians came at us from all directions,and Dimitri began dispatching them with the same deadly grace that had once made people call him a god.”

“Most fathers don’t threaten to disembowel their daughter’s boyfriends.”
“That’s not true. And anyway, that’s not what I actually said. It was much worse.”

“You’re beautiful in battle,” said Dimitri. His cold voice carried to me clearly, even above the roar of combat. “Like an avenging angel come to deliver the justice of heaven.”
“Funny,” I said, shifting my hold on the stake. “That is kind of why I’m here.”
“Angels fall, Rose.”

Why I Started This Book:
When I first saw the cover for Bloodlines and started to read the summary, and discover it was a spin-off I went in search for the original series on Goodreads. In my contry there’s a lot of talking about Richelle Mead books, so decided to give it a shot and was very impressed.

Rose Hathaway has always played by her own rules. She broke the law when she ran away from St. Vladimir’s Academy with her best friend and last surviving Dragomir princess, Lissa. She broke the law when she fell in love with her gorgeous, off-limits instructor, Dimitri. And she dared to defy Queen Tatiana, leader of the Moroi world, risking her life and reputation to protect generations of dhampir guardians to come.
Now the law has finally caught up with Rose–for a crime she didn’t even commit. She’s in prison for the highest offense imaginable: the assassination of a monarch. She’ll need help from both Dimitri and Adrian to find the one living person who can stall her execution and force the Moroi elite to acknowledge a shocking new candidate for the royal throne: Vasilisa Dragomir.
But the clock on Rose’s life is running out. Rose knows in her heart the world of the dead wants her back . . . and this time she is truly out of second chances. The big question is, when your whole life is about saving others, who will save you?

Caracters:
My Thoughts:
‘Last Sacrifice‘ is the last book in an amazing series, which has, to be honest, left me feeling a little depressed that it’s all over. I loved this book, is the last one, and I’ll miss this serie, especially Rose.
You Might Enjoy This Book If:
Is a series so I recommend the reading of the others first five books. This one is a series finale.
Favorite Quotes:

“Ah, my daughter,ʺ he said. ʺEighteen, and already youʹve been accused of murder, aided felons, and acquired a death count higher than most guardians will ever see.ʺ He paused. ʺI couldnʹt be prouder.”

“I don’t belong to anyone. I make my own choices.”
“And you’re with Adrian,” said Dimitri.
“But I was meant for you.”

“From behind Lissa, I heard Christian say, “Worst. Timing. Ever.” Adrian studied Lissa and then looked at Christain sprawling on the bed on the far side of the suite.
“Huh,” Adrian said, letting himself in. “So that’s how you’re going to fix the family problem. Little Dragomirs. Good idea.” Christian sat up and strolled toward them.
“Yeah, that’s exactly it. You’re interrupting official Council business.”

On My Wishlist is a fun weekly event hosted by Book Chick City and runs every Saturday. It’s where we list all the books we desperately want but haven’t actually bought yet. They can be old, new or forthcoming. It’s also an event that you can join in with too – Mr Linky is always at the ready for you to link your own ‘On My Wishlist’ post. If you want to know more click here.

New York Times bestselling author Nalini Singh’s exhilarating world of shapeshifters and psychics is “paranormal romance at its best” (Publishers Weekly). Now comes the story of an alpha wolf named Hawke used to getting exactly what he wants–and of the only woman who dares tangle with him.

Since the moment of her defection from the PsyNet and into the SnowDancer wolf pack, Sienna Lauren has had one weakness. Hawke. Alpha and dangerous, he compels her to madness.

Hawke is used to walking alone, having lost the woman who would’ve been his mate long ago. But Sienna fascinates the primal heart of him, even as he tells himself she is far too young to handle the wild fury of the wolf.

Then Sienna changes the rules and suddenly, there is no more distance, only the most intimate of battles between two people who were never meant to meet. Yet as they strip away each other’s secrets in a storm of raw emotion, they must also ready themselves for a far more vicious fight…

Meghan Chase has a secret destiny; one she could never have imagined.
Something has always felt slightly off in Meghan’s life, ever since her father disappeared before her eyes when she was six. She has never quite fit in at school or at home.
When a dark stranger begins watching her from afar, and her prankster best friend becomes strangely protective of her, Meghan senses that everything she’s known is about to change.
But she could never have guessed the truth – that she is the daughter of a mythical faery king and is a pawn in a deadly war. Now Meghan will learn just how far she’ll go to save someone she cares about, to stop a mysterious evil no faery creature dare face; and to find love with a young prince who might rather see her dead than let her touch his icy heart. 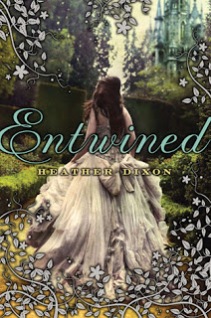 Azalea is trapped. Just when she should feel that everything is before her . . . beautiful gowns, dashing suitors, balls filled with dancing . . . it’s taken away. All of it.
The Keeper understands. He’s trapped, too, held for centuries within the walls of the palace. And so he extends an invitation.
Every night, Azalea and her eleven sisters may step through the enchanted passage in their room to dance in his silver forest.
But there is a cost.
The Keeper likes to keep things.
Azalea may not realize how tangled she is in his web until it is too late.