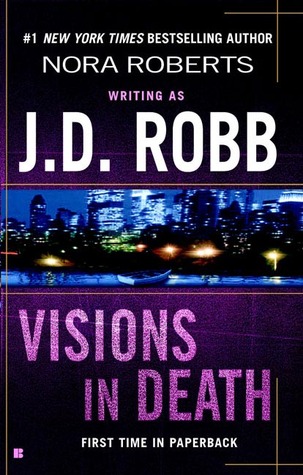 On one of the city’s hottest nights, New York Police Lieutenant Eve Dallas is sent to Central Park-and into a hellish new investigation. The victim is found on the rocks, just above the still, dark water of the lake. Around her neck is a single red ribbon. Her hands are posed, as if in prayer. But it is the eyes-removed with such precision, as if done with the careful hands of a surgeon-that have Dallas most alarmed.

As more bodies turn up, each with the same defining scars, Eve is frantic for answers. Against her instincts, she accepts help from a psychic who offers one vision after another-each with shockingly accurate details of the murders. And when partner and friend Peabody is badly injured after escaping an attack, the stakes are raised. Are the eyes a symbol? A twisted religious ritual? A souvenir? With help from her husband, Roarke, Dallas must uncover the killer’s motivation before another vision becomes another nightmare…

When I started this series earlier this year mystery was not a genre that I followed, but ever since Eve made me love a good investigation and I added several other books to my growing pile, but nothing is better than a good dose of Eve and Roarke. The last book was a little difficult for these two and thank god this one was more simple.

There was a lot of drama and Eve suffered for Peabody, but the investigation was perfect. I wasn’t really in favor of the visions in this case and Eve was so right in all her deductions that at moments I actually thought she had a gift, but the killings were brutal and Eve managed just fine to keep everything away.

Another great book for this series and Roarke was merely a sidekick in this one. Pity.