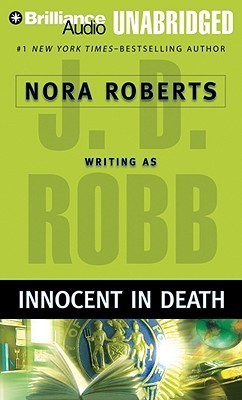 The death of history teacher Craig Foster devastated his young wife, who’d sent him off to work that morning with a lovingly packed lunch. It shocked his colleagues at the Upper West Side private school. And as for the ten-year-old girls who found him in his classroom in a pool of bodily fluids, they may have been traumatized for life.

Lieutenant Eve Dallas, of course, is more hardened to murder cases. And this is clearly a murder case. That lovingly packed lunch was tainted with deadly ricin. And Mr. Foster’s colleagues, shocked as they may be, have some shocking secrets of their own. It’s Eve’s job to get a feel for all the potential suspects, and find out why someone would have done this to a man who seemed so inoffensive, so pleasant;so innocent.

Now Magdelana Percell – there’s someone Eve can picture as a murder victim. Possibly at Eve’s own hands. The slinky blonde – an old flame of her billionaire husband, Roarke, from his days on the wrong side of the law – has turned up in New York, and she’s anything but innocent. Unfortunately, Roarke seems blind to Magdelana’s manipulation, but not to her shapely figure and flirtatious ways. And he insists that the occasional lunch or business meeting with her is nothing to worry about;and none of Eve’s business. Eve’s so unnerved by the situation that she finds it hard to focus on the Foster case. Still, she’ll have to put aside her anger, jealousy, and heartbreak, for a while at least – because another man has just turned up dead, and the case is taking some strange turns and hitting some frustrating dead ends.

Eve knows all too well that innocence can be a façade. Keeping that in mind may help her solve this case at last. But it may also tear apart her marriage.

The killer was easy for me to find, but I was a little scared in the end when Eve finally got the confession, the reason for the first murder is so small and this time we could clearly see this was a psychopath all the way. I loved the investigation and have to say that Eve was right almost from the start and people need to trust her better than just to blame in the past.

Magdalena was a pain in the ass, and Roarke deserved the punch and so much more for the moments he made Eve suffer and even judged her love for him. Even Summerset was on Eve side, so you can see who is right. They managed to find their passion and relationship back, but that Magdalena deserved to suffer a little more.