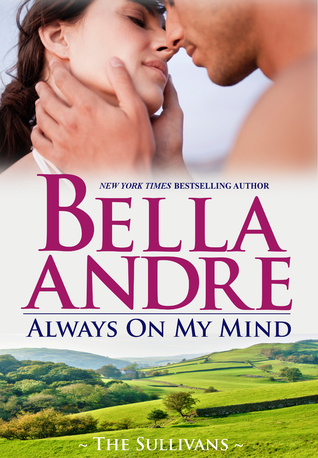 Lori “Naughty” Sullivan finally falls in love in ALWAYS ON MY MIND, the new book in Bella Andre’s New York Times and USA Today bestselling series about the Sullivan family.

After a tragic loss three years ago, Grayson Tyler left his life in New York City behind and started over in the rolling hills of the California coast. He’s convinced himself that all he’ll ever need again is the blue sky, a thousand acres of pasture, and the crashing waves of the ocean. Until one day, Lori Sullivan barges into his life and promptly blows his emotionless and solitary world to shreds, driving him crazy as only a woman nicknamed “Naughty” can. But will Lori be able to convince him that it’s safe to love her…and that forever isn’t actually out of reach?

I have to confess that this book was extra high on my wishlist, but after I read the summary and discovered that Lori’s happy ending was nothing to different, she got a nice guy and changed her life completely. I wanted more and her past relationship was a drama, but could have been more explored in this book.

Grayson was a nice surprise because at first I tohugh he was just another farmer, but he showed a very different and tortured side with pain and suffering. His family was barely there and he needed someone to actually help him, Lori was the perfect person to do that.

And here is my problem with this book, because I was supposed to love Lori and the changes in her life, but in reality I liked Grayson more and more during the sotry.

Movie star Smith Sullivan can’t afford any distractions. He’s staking his entire reputation on his new film…but he can’t stop thinking about Valentina Landon and the fire he sees smoldering just beneath the surface of her cool exterior.

Valentina isn’t averse to sensual pleasure, or even to the idea of finding true love, but as a Hollywood business manager she’s watched too many smart women fall for actors…only to be torn apart when the fairytale comes to its inevitable end.

But when intense weeks together on set turn their heated attraction into red-hot flames of passion, Smith knows he has to find a way to convince Valentina to let him get a little bit closer. Close enough to completely steal her heart…the way she’s stolen his from the start.

Smith is always mentioned as the pretty one and he’s almost perfect, but I though his book would be boring. He’s an actor and very famous so all the girls want him, but this book showed a different side of his life and we got to see the person behind the movies.

He’s a decent guy and wanted to make a movie to change lives and send a message, not just for movie and we can see this project is really important to him, because he wrote and is also directing the movie, but I liked that in the middle of all this he decided to pursue happiness too.

Valentina wanted nothing to do with him and we can clearly understand her reasons, but Smith is such a nice guy and he pays attention to her needs and her pleasures too. He wooed her and she could not help, but fall in love with him and I don’t blame her a bit.

This was a nice book and I liked Smith more than Valentina. Her family is a bit insane and the end was a little rushed to me, but we got to see the rest of the family and a wedding too.