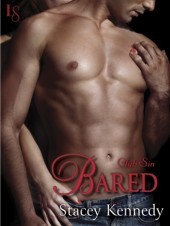 I received this book from NetGalley and Loveswept in exchange for an honest review. This does not affect my opinion of the book or the content of my review.

In a novel that’s perfect for fans of Fifty Shades of Grey,Stacey Kennedy returns to Club Sin with another wicked and wild tale of submission, seduction, and love.

I liked to see her fears and hesitations with a normal relationship and at the same time continue with her nights of bondage and pleasure in Club Sin. The problem in Cora’s life is Aidan, she feel on love with him and has some fears because he’s still mourning the loss of his wife. It’s completely understandable her fears, but at the same time I was hoping for her to come clean and explain to him, because we see from the start, their relationship is based on trust and Aidan is oblivious to everything related to love.

I thought these two made such a beautiful couple. I also wanted to see more of his parents, but for me the book is all about Cora.

Presley Flynn is ripe to experience her secret fantasies . . . and Dmitri Pratt wants nothing more than to fulfill them. Once inside the elite Club Sin in Las Vegas, Presley is nervous but excited—and determined to surrender to her every desire. Dmitri is her Master, and his touch is like fire. With each careful, calculated caress, he unleashes her wildest inhibitions, giving her unimagined pleasure.
Presley is different than the other submissives Dimitri has mastered. The BDSM lifestyle is new to her, and so are the games they play at Club Sin. From the start, Presley stirs emotions in him far beyond the raw purity between a dom and the perfect sub. For the ecstasy they share goes beyond the dungeon igniting a passion that claims the very depths of the heart.

I really loved this BDSM story for the time leght more than anything, because no relationship can be created in one night and we see Dimitri is helping her get along with her body needs and what she wants more than anything.
But what I liked more was Presley and her courage to discover a new sex life that can actually satisfy her after her dumb fiancé cheated on her. She broke up with the dummy and it’s trying to find her place and fulfill her needs.
I loved this couple and how much they showed some grow in this book. A short time passes, but we can clearly see they communicating and learning about the other, like in a normal relationship and not just D/s night.